A Date With Izzy Beaumont

Our writer Kaz B goes on a date with with Izzy Beaumont to find out what’s happening in her exciting whirlwind world of reality TV, Glamour & Romance!

With the new series of Celebs Go Dating hitting our screens 4th September on E4, we caught up with the shows reality TV star Izzy Beaumont to talk dating, her rise to fame and who she has a crush on!

Izzy began her career as a model, beauty pageant queen and Formula 1 Grid girl. She became the face of various big brands which covered a whole host of arenas from fashion to saucy fetish shoots, but she admits she prefers live events as with her bubbly and vivacious personality, she struggles to sit still for too long.

The reality star went on to win various pageants such as Miss Supranational bikini body and Miss Motors F1, but found her passion for motorsports outweighed traditional pageants and she channelled her energy into the motorsports circuit. 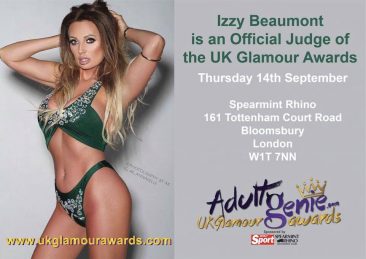 It seems that Izzy has spent a lot of time on the F1 track. Our curiosity got the better of us and we couldn’t resist asking who she most enjoyed hanging out with at F1. Cheekily we pressed, who should would most like to snog? Her eyes twinkle and she giggles sweetly as she confesses:

“It has to be Lewis Hamilton on both accounts!”

According to Izzy, he is a real sweetie as well as being a talented racing driver. So, would Lewis Hamilton be her dream date we ask? With a coy look, Izzy reveals that Christopher Walken would be her dream date and she’d take him to New York’s Central park on a sweltering summer’s day. Oh, to be a fly on the wall during that date!

Here at The UK Glamour Awards, we are keen to dish the dirt and find out all the juicy gossip and saucy details of the next series of Celebs Go Dating, in which Izzy appears. Izzy tells us there is going to be a lot more laughs and she will also be seen getting a psychic reading too. She laughs and says she can’t tell us any more than that right now and we will just have to tune into the show!

“Our date was supposed to be an hour and he made it 3 hours because we got on so well. There was a lot of naughty bits they cut out let’s put it that way ha-ha! He even got a cake with sparklers on for being such a good date!” 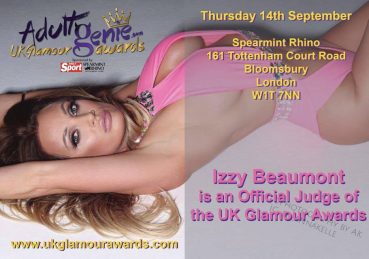 Not all of Izzy’s celebrity dates have run as smoothly. She presses her palm to her face and cringes as she relays a nightmare date she had with a famous footballer. Whilst the date itself took place at the beautiful Nikki beach in Monaco, she admits the footballer was so boring and full of himself that she had to make an excuse to leave early.  She says:

“As soon as we left the table Justin Bieber took it. Maybe I should have dated him instead ha-ha.”

It is well known that Izzy has an eye for the younger chaps and has been labelled a sexy cougar by the tabloids. So, what exactly does Izzy look for in a man?

“Well he has to be a good kisser.’’ she comments with a big grin “And I like guys that do as they’re told.” she says winking. “I don’t like guys who are self-obsessed with how they look. And they just really need to do cute things for me like surprise me with flowers and fun days out.” 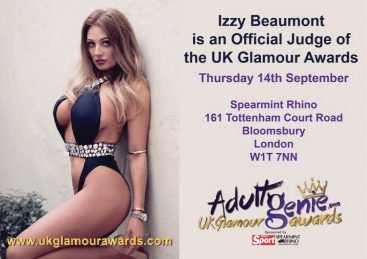 As we move onto discussing motorsports, Izzy’s eyes light up and her passion for the genre is obvious.  She reveals that her very first car was a black golf GTI Mk1. She currently drives a sexy black Merc SLK but is hankering after a Mercedes SLS in silver with gullwing doors. It’s obvious that this is a woman who exudes excellent taste and opts for class over trashy status cars. With this in mind, we are thinking we should set up a shoot for Izzy with Men’s Stuff Mag. We can just see her in a long elegant dress looking dazzlingly beautiful and draped over a classic car. Perhaps we can finally capture that cheeky kiss between Miss Beaumont and Lewis Hamilton.

With her successful career as a model and F1 Grid girl, Izzy has become a role model for younger girls who wish to follow in her footsteps. Izzy’s advice would be to avoid faddy diets and severe calorie restriction and instead focus on eating nutrient heavy plant based foods and strength training to maintain a shapely figure. She also feels that girls nowadays are getting Botox far too young. “I think it’s so bad that the doctors would even do it on them!” she tells us in an exasperated manner. 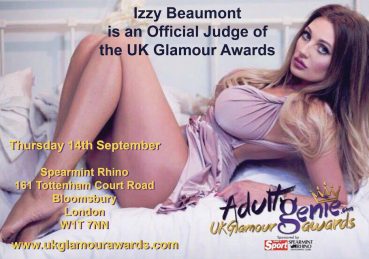 Izzy strongly believes that younger girls should enhance their natural beauty and avoid getting unnecessary surgery. It’s a very refreshing opinion in a world that is dominated by celebs who are clones of the Kardashians. It’s one of the many reasons we selected Izzy to be one of our official Judges at the UK Glamour Awards. She has an extensive knowledge of pageants and beauty contests and with her natural good looks, she is a strong role model for youngsters whom she encourages to embrace their inner beauty as well as their outer beauty.

With just ten days left until the UK Glamour Awards where Izzy will be on our judging panel, we wonder what it will be like for her to have the shoe on the other foot and to be a judge instead of competing. Smoothing a lock of silky hair with her fingers she tells us:

“I’m really looking forward to judging at the UK Glamour awards and excited to meet everyone on the team. I’m very fair and honest and I will be looking for character as well as beauty. I’ve won a couple of pageants so I don’t feel like I need to compete again, so being involved as a judge is perfect for me.”

Between judging the UK Glamour Awards, personal appearances across the country and filming for Celebs Go Dating, our judge has little time for recreational activity, although when time permits she loves to be spontaneous and book a last-minute holiday to Ibiza! Lounging on the beach and sipping an iced cocktail, whilst the world passes by seems to be the order of the day! We wonder if she has space for us in her suitcase!

It is clear that this jet set babe’s career is soaring like a rocket and she is even currently considering her own reality TV series. She also feels a collaboration with comedian Keith Lemon would be like comedy gold. Whatever Izzy does next, we can say for sure – it’s certainly going to be entertaining!

Tune in tonight at 10pm on E4 and come and meet this iconic star at The UK Glamour Awards on Thursday 14th September.

Article by Kaz B