With only 17 days until the UK Glamour Awards final, we are very excited to reveal that one of our Official Judges, Danny Lambo will be appearing on ITV’s X Factor.

Danny spent his youth making music in Japan where he was a massive success. He later opened hotel and celebrity hotspot The Pavilion in London. With guests like Kate Moss and Duran Duran,Danny was mingling and rubbing shoulders with the elite on a regular basis and even starred in Channel 4’s ‘How do you get so rich?’

In today’s news, one of the gossip rags is coining Mr Lambo – X Factors ‘latest novelty’ act, however the playboy millionaire is not short of fans and is set to become a household name this year as his music career takes off. 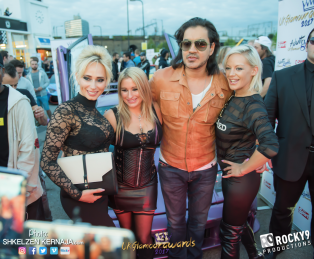 The 39 year old playboy has been compared to Marmite, in that you either love him or hate him and it’s true that he is no stranger to controversy and is not shy to share his opinion. Yet underneath the flashy exterior is a very focussed and driven entrepreneur with a big heart. Earlier this year the reality star helped to organise and host Central London’s Miss GB and has been a big supporter of our UK Glamour Awards.

“I am very excited to be involved with The Uk Glamour Awards and judging on the night. It’s going to be a tough job choosing the best talent from all those beautiful women but somebody has to do it!”

We’ll be following Danny’s journey and will be glued to our screens when the new series of X Factor launches the first week of September!

Danny will be at The UK Glamour Awards on 14th September amongst many other celebrities and will be mingling with the public. Come and show your support and get a selfie with him.